this time we will discuss a film that will be released next year, 2022 where this film stars one of the famous actors Dwayne Johnson. yes BLACK ADAM which we will discuss this time has a new take on Black Adam from director Jaume Collet-Serra’s upcoming 2022 film. Dwayne Johnson tweeted a new image of the character that will be used for the cover of an upcoming issue of Total Film.

The image features a close-up of the hooded Black Adam (played by Johnson). In the tweet, Johnson wrote, “You’re right. Superheroes don’t kill bad people. But I do.” – #BlackAdam. The hierarchy of power in the DC Universe is changing.” Johnson was cast as the character in 2014. When filming finished in July, Johnson posted on Instagram “I knew years ago, the opportunity for me to make BLACK ADAM was ONCE. IN CAREER EVENTS. It’s my honor to work shoulder to shoulder with a crew of over 1,000 brilliant and hungry filmmakers and storytellers to bring the antihero known as BLACK ADAM to life.” 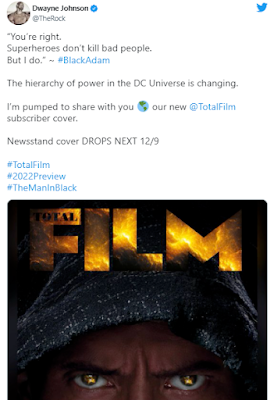 Johnson also starred in this year’s Jungle Cruise (also directed by Collet-Serra) and Red Notice (directed by Rawson Marshall Thurber). Johnson will take another trip to the DC Universe in 2022, where he will voice Superman’s dog Krypto in the animated DC League of Super-Pets (directed by Jared Stern). Joining Johnson in the film are Noah Centineo (as Atom Smasher), Aldis Hodge (as Hawkman), and Pierce Brosnan (as Doctor Fate/Kent Nelson).

Black Adam is slated for release on July 29, 2022. Meanwhile, fans can check out the trailer for another DC Johnson film DC League of Super-Pets online. Check out the new Black Adam pictures

25.00
CURRENTLY PLAYING
Why is SPIDER-MAN in