hold one of them to become a wife. With his supernatural powers, he immediately changed his form into a rooster. Then he walked over to the pile of clothes and wings while scratching his feet on the ground. When the seven princesses dived, Lahilote quickly took one of the seven wings, took him home and hid it in the rice barn under his house. 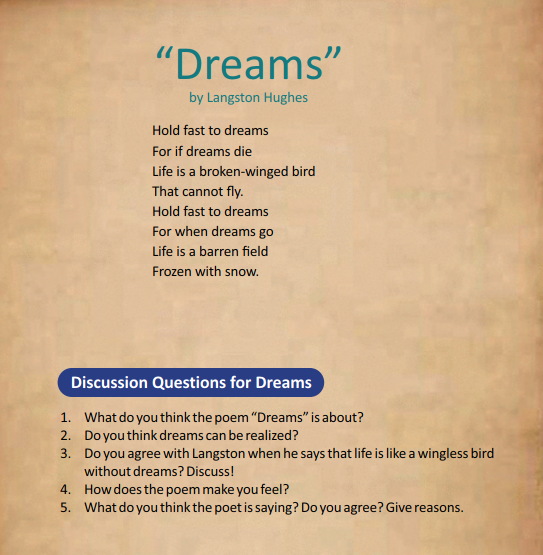 After that, Lahilote hurried back to the lake. Arriving there, he found the seven angels were packing. One by one they put on their own clothes. How surprised one of the angels was when he found out that his wings were not in place. Apparently, the angel who lost the wing was the youngest angel.

1. what do you think the poem ‘dreams’ is about?

2. do you think dreams can be realize?

3. do you agree with Langston that life in wingless without dreams? discuss

4. how does the poem make you feel?

5. what do you think the poet is saying? do you agree? give reason.

1.dream is one of many people wish even their body was in sleep

2.yes,but if its was not balance with the work will be nothing

3.no,because nothing about dream will be as real as real life

Once upon a time, in Tanah U Duluo lo`u Limo lo Pohite, Gorontalo, there was a handsome and handsome young man named Piilu Le Lahilote, who was familiarly called Lahilote. He lives alone in a small house on the edge of the forest. He was a young man who was diligent, hardworking, and had high dreams. To make ends meet, every day he moleleyangi (wandering in and out of the forest) hunting animals.

One day, when he was about to rest on the edge of a lake in the middle of the forest, Lahilote heard the voices of girls who were busy joking.”Hi whose voice is that? Where did the sound come from? ” Lahilote asked himself.

Lahilote immediately looked for the source of the sound. How surprised he was when he found out that the source of the sound came from that lake. He then hid behind a large tree, then peeked to check the situation. He gasped in surprise to see seven beautiful girls bathing and joking in the lake. He watched their every move without blinking. Apparently, the handsome young man was fascinated by the beauty of the girls.

At first, Lahilote thought that the seven girls were inhabitants of the earth. However, after seeing the pile of clothes and wings on the edge of the lake, he realized that they were Putri lo Owabu (the princess of heaven / angel). Stunned to see the beauty of these angels, then his intention arose to

While the youngest angel was confused about looking for her wings, her six older siblings were getting ready to fly to heaven because it was getting late.

“Youngest! We must leave you here alone! ” said the eldest as he flew into the sky with his four other siblings.

“What about the fate of your brother, Sis?” cried the youngest in pity.”Forgive us, sister! We can’t help you. Take care of yourself! ” exclaimed the eldest daughter.

The youngest could only stand staring at his six brothers who flew into the sky. When they disappeared from his sight, he burst into tears, lamenting his fate.

Meanwhile, Lahilote, who saw the youngest was sad, immediately came out of hiding, then approached him.“Hi, beautiful girl! What is your name? Why are you sad and crying? ” asked Lahilote as if he did not know what happened to the angel.

The beautiful girl did not answer. He kept sobbing. He only stopped crying after Lahilote seduced and seduced him many times.”My name is Boilode Hulawa from the Land of Heaven,” said the angel, introducing herself.Vice versa, Lahilote introduced himself to Boilode Hulawa, then returned to entertain him.

“O, Boilode Hulawa! Dinda doesn’t need to be sad to live on this earth. Kanda will help Dinda, ”comforted Lahilote.”But, Kanda! Dinda doesn’t have any relatives or family in this country, ”said the youngest angel with a sad heart.

“Calm down! Dinda don’t need to worry! Dinda can stay with Kanda at Kanda’s house, ”said Lahilote.Hearing this persuasion, Princess Boilode Hulawa’s heart, which had been sad, turned into joy and joy. Lahilote also invited Princess Boilode Hulawa to his house. After living together for a while, Lahilote expressed his desire to marry the heavenly daughter.

“O Kanda! Dinda has no reason to reject Kanda’s wishes. To whom else do you have to depend on your fate in this country other than Kanda, ”replied Putri Boilode, accepting Lahilote’s application.Finally, Lahilote and Princess Boilode got married. They live in harmony and peace. Since then, Lahilote has been working more and more diligently. He did not only hunt, but also cultivated crops. Meanwhile, Boilode Hulawa is busy taking care of household chores such as cooking, washing and cleaning the house.

A year later, Boilode began to feel bored and tired of doing the heavy work. He just felt how hard it is to live in the world because he has to work hard to make a living. However, with his supernatural powers, he can cook a grain of rice which is able to feed the two of them in one day. That way, he can save energy and food. However, her husband must not know about it so that his magic is not lost.