For a moment Boilode Hulawa was silent. After thinking hard, he found a way, namely by using his hair as a way for Lahilote to get to earth. One by one, Boilode began to pull out his hair and then connected it. After that, he told Lahilote to hold on and hang from the ends of the hair. Boilode has pulled all the hair on his head to become bald, but Lahilote has not yet reached the earth. Finally, Lahilote hovered between heaven and earth. His body was blown away in all directions because of the wind. 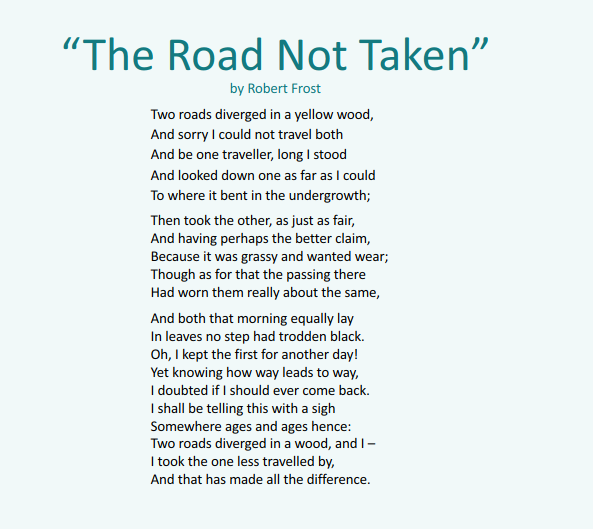 In such circumstances, suddenly the weather changes. The sky became cloudy, a hurricane was blowing hard and heavy rain. After a while. suddenly lightning came and grabbed Lahilote’s body until it split into two. No doubt, he fell to the earth in a standing position. His left body was slammed on Boalemo Island, Central Sulawesi, while his right side was slammed on Pohe Beach which was marked by the presence of his right foot on a rock. The local community gave the stone the name Botu Liodu Lei Lahilote.

2. what might the two roads respresent or symbolize? make a list of possibilities and discuss with your partnet.<br />

3. did the poet choose between the roads? which road do you think the chose?<br />

4. do you think the poet is content with his choice? give reason to support your answer.<br />

kunci jawaban the road not taken

1. It is about being independent / the journey of our life.

2. The roads represent the decision we make in our lives.

3. He chose the one less traveled.

4. Yes, because at the end he wrote: “I took the one less traveled by, and that has made all the difference.” If he took the other road, he won’t be where he is today.

“Kanda! We have to keep this a secret. If one of the inhabitants of this country finds out that there are gray hairs on Kanda’s head, then woe to us. We will be expelled from this country, ”said Boilde Hulawa.

“No, Kanda! It will be more dangerous, because Dinda’s family will smell the burning hair which is very strong, ”said Lahilote.

They are confused about what to do. After thinking hard, there is no other way for them to take except to return to earth. When they arrived at the heavenly gate, they did not find the Hutia Mala tree that was used by Lahilote. The Hutia Mala tree has been eaten by rats, because the cat that looks after it has left due to running out of food.

“Wow, Dinda! How can Kanda come down to earth? The Hutia Mala tree is no longer there, while Kanda doesn’t have wings like Dinda, “asked Lahilote confusedly.

That is the legend of the origin of Botu Liodu Lei Lahilote from Gorontalo Province, Indonesia. The moral message that can be learned from the story above is illustrated in the attitudes and behavior of Lahilote and Boilode Hulawa. With determination and hard work through various obstacles and trials, Lohilote managed to meet his wife in the Land of Heaven. Meanwhile, Boilode Hulawa is a wife who is loyal to her husband. She was willing to sacrifice everything she had, including sacrificing all the hair on her head to become bald in order to save Lahilote’s life, even though in the end her husband died as a result of being hit by lightning.

In ancient times, there was a knight named Hang Tuah. When he was a child, he and his parents, Hang Mahmud and Dang Merdu, settled on Bintan Island. This island is in the waters of Riau. The king was Sang Maniaka, the son of Sang Sapurba, the great king who had martial arts on Siguntang Hill.

ng Mahmud had the feeling that one day his son would become a prominent figure. When he was ten years old, Hang Tuah went to sail to the South China Sea accompanied by four of his friends, namely Hang Jebat, Hang Kasturi, Hang Lekir, and Hang Lekiu. On the way, they were repeatedly harassed by lanun hordes. With all his courage, Hang Tuah and his friends were able to defeat the gang. The news reached the ears of the Treasurer Paduka Raja Bintan, who was very amazed at their courage.

Several years later, the King planned to find a new place as the center of the kingdom. He and his royal courtiers, including Hang Tuah and his friends, traveled around the Malacca Strait and Singapore Strait. The group finally stopped at Ledang Island. There the group saw a white deer (mouse deer) which turned out to be difficult to catch.

According to the advice of the elders, if you meet a white horn in the forest, it is a good place for the country to make. Finally a country was built there and it was called Melaka, after the name of the Melaka tree found in that place

The story of Cindua Mato

The story of Putri Gading Cempaka

The Legend of the Seven Princesses, The Origin of the City Name Dumai

After reigning for a long time, the King intends to propose to a beautiful princess named Tun Teja, the only daughter of the Seri Benua treasurer in the Indrapura Kingdom. However, unfortunately the princess refused the King’s proposal. Finally, the King proposed to Raden Galuh Mas Ayu, the only daughter of Seri Betara Majapahit, the great king of Java.

The day before the wedding, a commotion occurred at the Majapahit palace. Taming Sari, an old but very tough Majapahit warrior, suddenly went berserk. Knowing the situation, Hang Tuah then confronted Taming Sari. Hang Tuah has a clever strategy by exchanging his keris for Taming Sari’s.

The King and his wife and entourage then returned to Melaka. For years the country was safe and secure. Hang Tuah became an admiral who was very loyal to the king of Melaka and was loved and trusted by the king. It aroused envy and envy by the soldiers and palace officials.

One time, a slander spread that said that Hang Tuah had acted disrespectfully with a palace maid. The slanderer was Patih Kerma Wijaya who was jealous of Hang Tuah. His Majesty the King was angry at the news. He ordered Treasurer Paduka Raja to expel Hang Tuah. The Treasurer was actually reluctant to carry out the King’s orders because he knew Hang Tuah was innocent. Tuan Bendahara suggested that Hang Tuah quickly leave Melaka and go to Indrapura.

Once upon a time, Indrapura arrived by a Melaka boat led by Tun Ratna Diraja and Tun Bija Sura. They asked Hang Tuah to want to return to Melaka. Tun Teja and Dang Ratna also joined the group.

Arriving in Melaka, Hang Tuah then met the King. Hang Tuah said, “I’m sorry, my lord, so far I have lived in Indrapura. I returned to remain loyal to the king. ” Tun Ratna Diraja reported to the King that Hang Tuah came with Tun Teja, the daughter whom the King had dreamed of.

ong story short, Tun Teja finally agreed to become the King’s second wife even though he actually loved Hang Tuah. Hang Tuah then served again as Admiral Melaka, who was very loyal and loved by the king.

After Hang Tuah’s death, Hang Jebat had lost his mind and became drunk with power. He acted arbitrarily. Jebat also often acted disrespectfully to the royal officials and the ladies-in-waiting. Many people have advised him. However, Hang Jebat remains stubborn, unwilling to change.

His Majesty the King became angry at Hang Jebat’s behavior. Not a single soldier was able to defeat Hang Jebat. The king then thought of Hang Tuah. The Treasurer told the King, “Sorry, Sire, actually Hang Tuah is still alive. He fled to Hulu Melaka. ” On the orders of the King, Hang Tuah agreed to go to Melaka.

Admiral Hang Tuah often travels abroad to the land of Judah and Rum to expand the influence of the kingdom of Melaka around the world.

One time the King sent a trade envoy to the Bijaya Nagaram Kingdom in India, which was led by Hang Tuah. After arriving in India, the group continued its voyage to China. At the Chinese port, the Hang Tuah group clashed with the Portuguese, because they were very arrogant, they did not accept Hang Tuah from anchoring his ship beside a Portuguese ship.

After facing the King of China, the Hang Tuah group then continued their journey back to Melaka. On the way, they were attacked by Portuguese boats. Hang Tuah was able to overcome their attacks. The captain and a Portuguese officer fled to Manila, Philippines. The Hang Tuah group finally arrived in Melaka safely.

One day the king of Melaka and his family traveled to Singapore accompanied by Admiral Hang Tuah and Bendahara Paduka Raja in various oversized boats. When he arrived at the Singapore Strait, Raja Syah Alam saw a gold-scaled fish with a quality beads around the Syah Alam boat. When he looked at the surface of the water, the King’s crown fell into the sea.

Meanwhile, the Portuguese governor of Manila was furious at the reports of the defeat of his officers who managed to escape. After several months of preparation, the Portuguese army departed for the Straits of Melaka. At this place, they started an attack on Melaka which overwhelmed many of the Malacca warriors. At that time, Hang Tuah was seriously ill.