Instantly Nala is heartbroken for her task of conveying the message to Damayanti, but she cannot refuse the gods. Then on the night before the contest, Indra secretly sent Nala to Damayanti’s room using her divine powers. There, for the first time he saw the woman he loved. He was blown away! She was prettier than words would describe, prettier than any photo she had ever seen. Likewise Damayanti, he immediately recognized Nala. They hugged for a long time. 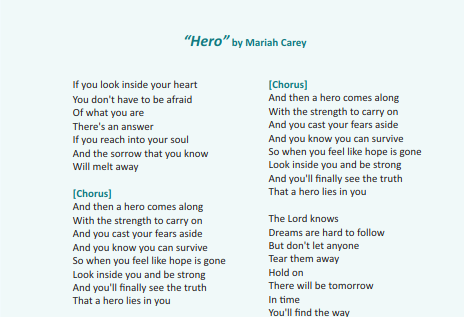 When the time came, Damayanti entered the hall flanked by her father and mother. She is wearing a silk blouse with gold knick knacks and she looks radiant beauty. He was excited because this is the day he will choose Nala as her husband. But then he was shocked when he saw five Nalas sitting in the corner of the hall. Damayanti realized that the gods were trying to trick her. How can he know which Nala is the Original?

This song is about the importance of the confidence, bravery and spirit in facing anything in our live. We’re a hero for ourselves. So don’t be afraid and just believe in yourself.

2. According to the song “hero”, what makes a hero?

The confidence and bravery can make everyone becomes a hero for himself or other.

My Hero is the Prophet Muhammad S.A.W. He had brought us out of the dark ages to the era of bright light today, namely Islam. He is my role model. Because of him we know Allah S.W.T.

4. How does this song makes you feel?

The song makes me feel optimistic, confident and brave as long as we are in the right path.

He then turned his back on the contest participants and took out his android cellphone from the small bag he always carried. Even though there was no internet connection, he forced to type on the google machine “How to distinguish between humans and gods?”. Damayanti seemed several times shaking the gadget and then disappointed and angry.

Damayanti thought very hard what to do. Then he looked closely at the exact same five Nalas. After a few minutes, he realized the four Nalas were staring unblinking while the five were blinking regularly. And the man’s clothes were a little shabby and the flower that was pinned to his chest withered a little. The other four Nalas didn’t blink, and the flowers on her chest looked fresh and perfect.

“There he is!” thought Damayanti. “Nala is not a god. She wasn’t perfect like a god, and also she blinked and her clothes and flowers were imperfect. I know she is the real Nala! “

Damayanti walked over to the blinking man and said, “You are the real Nala. You are the one I choose. ” Then he draped her a wreath. Nala and Damayanti smiled at each other then stepped towards the throne where Damayanti’s father and mother sat. The four gods change into their original forms and pretend to bless the bride and groom and return to heaven. The king and queen gave their blessings and the wedding party was held lively.

Stand in front of a rectangular cut object; staring into it, in a mirror you fix the light blue veil of your choice. On the face that you stare at carefully – in that mirror – you apply makeup, wipe your make-up several times until it is evenly distributed. Slightly polish your lips with lipstick.

Outside I have been waiting. Standing folded arms then put them in pockets like I’ve done it a thousand times. Many times I looked towards the door then turned around for a while then stole another glance there, however, I still did not find your nose. Often I tilted my head high up, surveyed in silence, groped in the dark, counted the stars in the sky that felt like counting the minutes that had passed.

A few minutes ago it looks like you still feel uncomfortable with the choice of clothes. You have unpacked the entire wardrobe and have tried every color and style of clothing that worries you more. This is the first time you will go out with me.

The time showed half past eight. It’s getting late.

“Take your time whatever you want.” I said thinking.

In the void, because I had been waiting for your presence for a long time, I was stuck thinking about the words I want to say to you the next time you appear in front of me.

“Hello, you are beautiful tonight … ah shit this is too much.” I said grumbling to myself. Then try another word “Hello? Why did it take so long, you … “I couldn’t finish the words” This is so cruel! “

I was stunned again as I stared anxiously at the door. I became more and more nervous as if I wouldn’t be able to say one word that would change the whole story of life. Many times I sighed the weight of the breath I inhaled to raise the guts that were getting shriveled up.

Finished with your final lipstick, you appeared to me and I saw that you were still awkward as if you were uncomfortable with your appearance. Often times you steal a glance at the dark glass window beside the door, as if wishing you could reflect on it.

I don’t see anything wrong. To me you look so beautiful when you can’t cover your mind. The anxiety that was seen by me on your sad face made you look very beautiful.

My chest is pounding watching your every step in folding the remaining few meters from me. Something then swirled in my stomach when you finally arrived in front of me. Only silence answers your knot smile and immediately my stomach feels like twisting, it feels like I have found my home. Maybe I never told you but, I really want you to know, you have been with me since your greeting the first time we met.

“Hello, Mas? Sorry for making you wait so long … “

“So where are we going tonight?”

Where are we going? I really do not know. I didn’t really think about where you would go. There is actually a most special place I have in this city however, it’s too early and maybe you won’t like it. Because it was just a bridge under which a cloudy stream flowed. It’s just that in that place, we will feel free to look at the sky without being obstructed by city buildings and messy cables. Hugging the sky and showing her a white star then together holding a dream is my desire but, not tonight. And also I don’t know whether to him the stars are more than just a splash in the night sky.

“How about we go around the city … and visit the golden-domed white monument?” I say more like a haphazard idea than a brilliant one.

“Can.” The answer smiled his beautiful smile. Actually the prettiest I can ever remember.

Then I turned on the black motorbike that would accompany us to carve our story. Even if you feel reluctant about the motorbike tailku, you ride it gracefully and steadily. My heart feels relieved. A moment later we slide on very congested roads.

Tired of just wandering around erratically then stopped in front of the monument in the middle of a crossroads. It’s just that we then share the story. Then continue the journey again. Then we come to a clearing and we walk into a crowd of people. But we feel we are alone, together in the middle of the universe.

The street sparkles, the fanfare of many pairs of eyes trying to grab your attention. But you only smiled. A smile that grows meaning in my later poetry. You really stole the show that night. Because I feel that there is only grass that is slightly wet that looks like dancing around us. The leaves then start whispering to fill in the riddles we throw at each other and then we laugh. We hum and then stare at each other. Your eyes are as sharp as a burning fire, swaying violently with enthusiasm to make the house even warmer.

Then when you are by my side and start leaning beside me. I feel your heartbeat remind me of the attempt to invite you that night. And I still can’t say what I really want to tell you. But you took my hand and invited me to dance slowly sweeping the night dust. Then you push your lips close to my ear and whisper it softly.

“Thank you for asking me to go out tonight.”

That morning, it was drizzling with rain, soft specks like needles spilling all over the village. At first it was just the leaves in the yard gleaming like molten silver in the sun. The golden light shot through the sluggish drizzle; Beautiful morning, smooth lines flickering.

But before long, the gutter began to be inundated by rippling water, making a sad song. On the sides, the cement-lined roadblocks looked shiny, shiny and very clean without dust. Along the road divider, the trees that grow lush cool because of the heavy rain and give off a fresh scent, like the combination of the smell of the first rain and the smell of yellow rice in the wind a week before the harvest season arrives – if it must be described simply as a distinctive fragrance. spring air. Meanwhile above the horizon, the light that had been able to penetrate the fog gradually faded before it became completely dark.

The sky was so dark, black clouds rolled in impenetrable the eye could see. From above, the rain poured down more and more heavily down the earth, wetting the yard of the house and the pale concrete roads — a very sturdy road that was the result of development progress and the spirit of the Duri community’s self-help. Even though the rain was getting heavier and harder, only a little water had stagnated in the streets and courtyards of the houses. Because the concrete-paved roads have trenches, which are always kept clean. So that the rainwater is so smooth, flowing to Kedung Biru which is located in the northeast next to the village.

For a young man who was standing on the veranda of his house, that morning was not only beautiful, but also special. After so many years had passed leaving footprints there, that morning was the beginning for him – a young man who was in his 30s – to return to devouring all the coolness, and following the old footprints he had written in his hometown. The manly young man, with his eyes sharp and sparkling like a wild candle flame, was now gazing at a landscape that had lived only in memory for years.