Home Bahasa inggris kelas 11 1. What do you think the title “Stand by Me” means?

Billy also threw himself into his work chair. He snorted heavily and ruffled his hair in frustration. Bram and Riska chuckled at Billy’s behavior. Meanwhile, Felly was immersed in the imagination of her mind. 5 hours they worked on the design. When the hour comes home, Felly is still sealing her friends to do her job. Many parts have been changed slightly. Felly’s habit. Hard work without knowing the time. Sometimes, Felly let her friends starve at their mealtime. And it passed for 5 days. Until finally, when the final touches were almost over, they were shocked by the news that Bram had heard. Well .. the theme is fauna and flora. They don’t give a touch about that. 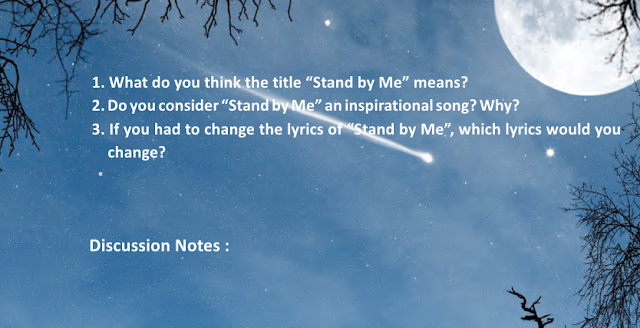 They only use fauna material. Not like fauna. Change their crown? Impossible. The time to do it will be long if you want perfect results. They all frantically with the news. Anxious and confused faces crept over their faces. However, Felly was calm and level with a very serious mind. As if, her mind was getting heated to match her dress and outfits. Felly walked over to the large table. The table they used to make sketches. And… that’s where Felly’s idea came up. Wing. Well .. the eagle’s wings are wide open. With brown blending with white. Cat. Well .. that’s the basic ingredient.

1. What do you think the title “Stand by Me” means?

The song title “Stand by Me” in Indonesian means “Berdiri di sisiku” or “Tetaplah di sisiku”.I think the writer of this song, Ben E. King, dedicated this love song for his partner at that time. Ben wrote this song that’s simply about wanting someone to stand by him through anything is just so beautiful.

2. Do you consider “Stand by Me” an inspirational song? Yes, I do.  Its about love, friendship and loyalty.

Why?  The lyrics are strong and consists of beautiful words. The lyric is about standing together in tough times, keeping strong and keeping relationships going. This is a song about true love. It tells about a love that able to survive, no matter what trials and traumas it encounters. The love was built equally strongly to stand the test of time.

3. If you had to change the lyrics of “Stand by Me” which lyric would you change?

When the night has come

And the land is dark

And the moon is the only light we’ll see

Bram began to draw it with his graphical hand. Meanwhile, Billy went out to buy the materials he needed. Riska and Felly helped Bram to make this happen. Crown feathers. Until now, they have not found the fur. They keep thinking about the feather. Until finally, they found a solution. Well… they use cat ingredients. Dipping them in paint, drying them one by one. Because, they thought. If they use the same feathers as the wings, the dress will have a muted look from the same color. Meanwhile, the dress that will be used by the model is full color. How not, this has its own obstacles for them. So, they have to go the extra mile than before.

Many other designers laugh at them because they look old-fashioned when they see the batik embeds. However, they haven’t seen the entire dress of their creation. Felly swore her victory. For her, this dress is Felly’s first innovation dress. In a sense, for the first time Felly created a dress from trash.

They had spent two days working super crazy. Until the time came, Larissa stood on the stage in the most different clothes. With a touch of make-up that makes her eyes sharp and red lipstick with a shape polish on her lips, adding to her sexy lips. The straight path, the straight chin, and the inverted sway that Felly taught was faultless and ruined the charm of the tail of her dress.

A patch necklace made by Billy with a patchwork base and also a touch of knick-knacks, makes everything look perfect. When Larissa has performed their dress show, the announcement of the best dress came out. They heard their hearts beating fast. Shout out with fear and anxiety. Likewise with Larissa. Uninstall !!! Heart they felt dislodged when Felly widened his eyes. He was shocked and shaken when the crown of the award along with the trophy and flower parcel was in his hands. Billy and Bram breathed a sigh of relief. Meanwhile, Riska shouted happily by hugging Felly hysterically. They celebrate this victory. The latest innovation for their team.

After they got off the stage, they accepted interviews from several social media who were scrambling to get answers from Felly about batik. Starting from why? Why? How? And where did Felly get the idea of batik that seemed ancient to turn into glamor when it was in Felly’s hands? Felly only replied that he wanted to preserve the cultural heritage of his country. As well as, carry out the message of his father who has died. “Safeguard your country, and there you guard your life. Your country is your breath. Your country, is your life. And your country is your love. “

When the interview session was over, Felly was being waited on by someone in the meeting room. They get offers for their boutique designers abroad. Even that person is determined to provide a decent life there if Felly accepts their offer to go abroad after graduating from high school. Felly discussed with his team. And, he decided to go together with his friends. With the condition, that person must be willing to accept Felly’s design which is always embedded with batik in it without losing its cultural heritage. That person agreed and signed a work contract with Felly who intends to introduce batik to the world and show the beauty of the Indonesian state with her designed clothes.

For me today is the happiest day. How could I not, on the first day I entered school, I was invited by a woman to meet me. I’m really embarrassed.I couldn’t refuse it, because I was a transfer student from the next school. Honestly, I never had anyfemale friends since elementary school.I was confused what to do when he reached out and gave his name while saying “my name is Dewi, nice to meet you”

I also innocently introduced myself, Miqdad. After shaking hands he immediately left and ignored me. But on my own, I couldn’t move after the post was released. My body was shaking and I was confused about what to do.I force this foot to step into the classroom and try to be as normal as possible, lest the ridiculousness of many students appear in class. I might just be a laughing stock.

Just then, the bell rang indicating the first lesson had started. I sat on the back bench, hoping no one would see me. I’m still not used to the murmur here.

The teacher also asked me to introduce myself in front of the class. I introduced myself briefly and hurried to my seat again. I don’t really care about the surroundings, I just stare at the blank book and try not to do things that make children’s attention to me.

Immediately, the teacher opened the material and I looked forward. Without realizing it, after I glanced a little at my left bench, it turned out that she was the woman who invited me to an acquaintance earlier.

1.) what do you think the theme of the song?

1. Have you ever witnessed an earthquake? What effect did it have on you?